Let me just say, to start I am not trying to get up on some soapbox and preach about the dangers of smoking. Everyone reading this is most likely an adult capable of making their own informed decisions. I am not denouncing smoking by any means. In fact in my last article, even though I was talking about quitting smoking I touched on the fact that it was a great aid in early sobriety. It helped ease the daunting task of socializing and getting to know people. Also, along with copious amounts of Red Bull, it was the artificial energy boost I needed.

The point of this article is just to inform. The choice is yours to do with information as you see fit. Looking back I would not change anything, quitting after my first year was the right course of action for me. I never cared to learn before, but I was very surprised when I checked out actual statistics of the lethality of smoking. I find it a bit ironic that after putting down the bottle, many sober alcoholics pick up tobacco. We quit drinking because it was ruining our lives in both health and personal relationships but many pick up a much more harmful but commonly accepted substance.

These statistics are all found on www.cdc.gov: 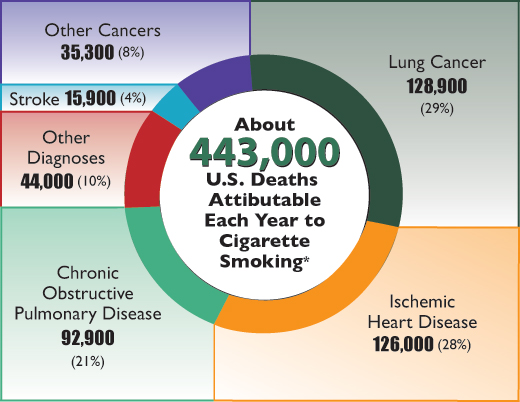 The infographic above shows the estimated average annual number of smoking-attributable deaths in the United States during 2000 through 2004 by specific causes, as follows:

Wow, 443,000 annual deaths cited as health complications due to smoking. That is an absolutely staggering number. The CDC also explores further: Smoking can cause lung and other cancers, coronary heart disease, stroke, chronic respiratory disease, and other diseases. In 2008, CDC reported that cigarette smoking and exposure to secondhand smoke resulted in 5.1 million years of potential life lost (YPLL) annually in the United States during 2000–2004. Tobacco use is the single most preventable cause of disease, disability, and death in the United States. Each year, an estimated 443,000 people die prematurely from smoking or exposure to secondhand smoke, and another 8.6 million live with a serious illness caused by smoking. Despite these risks, approximately 46.6 million U.S. adults smoke cigarettes.

Surely though alcohol must be the bigger killer, with its direct effect on health as well as deaths caused by drunk driving or alcohol related incidents. It absolutely must touch a much larger population, right?

Lets take a look at that one:

In 2001, an estimated 75,766 Alcohol Attributed Deaths and 2.3 million YPLLs were attributable to the harmful effects of excessive alcohol use. 34,833 (46%) resulted from chronic conditions, and 40,933 (54%) resulted from acute conditions. The leading chronic cause of AADs was alcoholic liver disease, and the leading acute cause of AADs was injury from motor-vehicle crashes. In 2010, a total of 25,692 persons died of alcohol induced causes in the United States. This category includes deaths from dependent and nondependent use of alcohol, and also includes deaths from accidental poisoning by alcohol. It excludes unintentional injuries, homicides, and other causes indirectly related to alcohol use, as well as deaths due to fetal alcohol syndrome.

Over time, excessive alcohol use can lead to the development of chronic diseases, neurological impairments and social problems. These include but are not limited to—

The number of deaths from illness from excessive alcohol use as well as any related deaths, such as motor vehicle crashes and alcohol poisoning is 101,458. Even combined that number does not come close to touching the amount of deaths caused by smoking, which is almost 4 times as much. That is really a mind boggling fact. According to the CDC, alcohol is the third leading cause of preventable death, obesity being the second, and first is the harmful effects caused by smoking.

How about some less morbid stats? Now lets look at the benefits of quitting smoking, how your body starts to recover in as little as 20 minutes.

20 Minutes After You Quit: The effects of quitting start to set in immediately. Less than 20 minutes after your last cigarette, your heart rate will already start to drop back towards normal levels.

Two Hours After You Quit: After two hours without a cigarette, your heart rate and blood pressure will have decreased to near normal levels. Your peripheral circulation may also improve. The tips of your fingers and toes may start to feel warm. Nicotine withdrawal symptoms usually start about two hours after your last cigarette.

12 Hours After You Quit: Carbon monoxide, which can be toxic to the body at high levels, is released from burning tobacco and inhaled as part of cigarette smoke. Because carbon monoxide bonds so well to blood cells, high levels of the substance can prevent these cells from bonding with oxygen, which in turn causes serious cardiovascular problems. In just 12 hours after quitting smoking, the carbon monoxide in your body decreases to lower levels, and your blood oxygen levels increase to normal

24 Hours After You Quit: The heart attack rate for smokers is 70 percent higher than for nonsmokers. But, believe or not, just one full day after quitting smoking, your risk for heart attack will already have begun to drop. While you’re not quite out of the woods yet, you’re on your way!

48 Hours After You Quit: It may not be life-threatening, but deadened senses—specifically, smell and taste—are one of the more obvious consequences of smoking. Luckily, after 48 hours without a cigarette, your nerve endings will start to regrow, and your ability to smell and taste is enhanced (Cleveland Clinic, 2007). In just a little while longer, you’ll be better appreciating the finer things in life.

Three Days After You Quit: At this point, the nicotine will be completely out of your body. Unfortunately, that means that the symptoms of nicotine withdrawal will generally peak around this time. You may experience some physical symptoms such as headaches, nausea, or cramps.

Two to Three Weeks After You Quit: After a couple of weeks, you’ll be able to exercise and perform physical activities without feeling winded and sick. This is due to a number of regenerative processes that will begin to occur in your body; your circulation will improve, and your lung function will also improve significantly. After two or three weeks without smoking, your lungs may start to feel clear, and you’ll start breathing easier (AHA, 2012). For most smokers, withdrawal symptoms dissipate about two weeks after quitting.

One to Nine Months After You Quit: Starting about a month after you quit, your lungs begin to repair. Inside them, the cilia—the tiny, hair-like organelles that push mucus out—will start to repair themselves and function properly again. With the cilia now able to do their job, they will help to reduce your risk of infection. With properly functioning lungs, your coughing and shortness of breath may continue to decrease dramatically. Even for the heaviest smokers, withdrawal symptoms will go away no more than several months after quitting.

One Year After You Quit: The one-year mark is a big one. After a year without smoking, your risk for heart disease is lowered by 50 percent compared to when you were still smoking (CDC, 2004). Another way to look at it is that a smoker is more than twice as likely as you are to have any type of heart disease.

10 Years After You Quit: Smokers are at higher risk than nonsmokers for a daunting list of cancers, with lung cancer being the most common and one of the most dangerous. Smoking accounts for 90 percent of lung cancer deaths worldwide. It may take 10 years, but if you quit, eventually your risk of dying from lung cancer will drop to half that of a smoker’s (CDC, 2004). Ten years after quitting, your risk of cancer of the mouth, throat, esophagus, bladder, kidney, and pancreas also decreases.

15 Years After You Quit: Fifteen years of non-smoking will bring your risk of heart disease back to the same level as someone who doesn’t smoke (CDC, 2004). You’ll no longer be at a higher-than-normal risk for a wide range of conditions like heart attack, coronary artery disease, arrhythmias, angina, infections of the heart, or conditions that affect your heart’s beating rhythms.

Long Term Benefits: The long-term benefits of quitting smoking are fantastic. According to the American Heart Association, non-smokers, on average, live 14 years longer than smokers (AHA, 2011). Quit today, and you’ll extend your lifespan and live those extra years with a functional cardiovascular system, while being active and feeling great.

I can certainly attest to the facts in this list. When I quit I found I could breathe easier and laugh without coughing. Food tastes better and now I am using less salt. My clothes no longer had the stale smell of smoke hanging around and my self esteem has improved by not worrying if I have smoker’s breath. The biggest benefit of all for me though is money. A pack a day smoker, assuming an average of 6$ a pack, saves 2,190$ in a year! What can you do with that money? Thats what I thought immediately realizing how much I could be saving.

Even though we all have our own reasons to get sober from alcohol, health complications are a concern for many. I found it strange we put down one substance but it is so common keep a much more harmful one. Some continue smoking because they were smokers before, some pick it up in recovery like I did. Nicotine is a much more accepted substance to use, I barely blinked an eye at it. I always knew it was not exactly good for me, I never cared about how harmful it was. Before I did my research I would have told you without a doubt, alcohol and drugs were the bigger killer than smoking, especially factoring in the multi faceted ways drugs and alcohol can kill.

Some rehab and sober living facilities are starting to introduce programs that limit or outright ban nicotine and caffeine. I do not know if I would be able to do that, caffeine is almost a necessity for me. While smoking as I said before was a great aid, albeit a crutch for social interaction. What are your thoughts on the disparity of health effects of nicotine vs alcohol? Do you have your own reasons to keep smoking or to quit? Did you ever care to know the statistics? Leave your comments below.

C.S. Bridger is an LA based writer and photographer trying to make sense of recovery

Do you or someone you know need help with addiction? Leave your contact information and we will reach out to see how we can help.

If you or someone you know needs help navigating the road to recovery in Los Angeles, New York, or Houston, get in touch with one of our confidential Admission Specialists.

Hungry yet? 🤤 You can find chef Steve cooking

So proud of our New York guys! We are honored to b

Some of our Houston men got together for a few rou

Happy sober birthday Ricki and David! You both are

Happy Sober Birthday! We are blessed to have you p

Join us for our second week of Families Matter! S

It’s never too late to celebrate a sober birthda

We are so excited to announce our new free family

Happy Sober Birthday and May the fourth be with al

Happy Sober Birthday to these 4 Amazing people! Yo

Happy Sober Birthday to all! And big thank you to